Okay, so in our family game night, it was a marathon two hours of Mexican train that started after dinner, which my daughter and husband tied at the very end of the game, almost unreal that it happened, but they had a winner take all grudge match and my son and I watched and laughed while looking at their dominos to see who would win.  It came down to the last two dominos and my husband won.  So for all of you that don’t know, we have a chalkboard in the kitchen keeping track of all the family game night wins and my husband has been killing it with 6 wins.  We are competitive to say the least!  But that made for a longer night, and then my daughter came in my bedroom at 10pm to ask for help on genetics.  I have a Master’s in Biology and genetics is one of my favorite subjects, so I had a good time helping her solve the problems.  And no I didn’t give her the answers, but helped her problem solve.  So when I actually laid down to go to sleep it was past 10:30.  But I wasn’t going to give up this precious time with my family nor giving up the genetics problems for sleep.  I don’t go to bed very late but every once in a while it’s okay.  So last night was it.

I got up at 5am this morning to work out, so there was a much needed tall cup of Espresso this morning with my name on it.  I usually go to bed early between 9-9:30 at the latest because on a normal day I am up at 4:45am to go to the gym.  Since the gym is now in my basement, I allow myself a little bit longer to sleep.  HA HA!  But today I am a little sleepier than usual, which means tonite should be interesting.  We may have to make game night earlier so I don’t fall asleep a the table.  And hopefully no two hours of whatever game my husband chooses tonite.  And yes, his exact quote last night was, “I am going to pick a word game so I can game some distance on my wins.”  See for yourself below.  But at the end of this third week at home, we have had a great time as a family enjoying each other’s company and being competitive.  Maybe I’ll talk my husband into watching a movie tonite instead and giving up his pick… 🙂 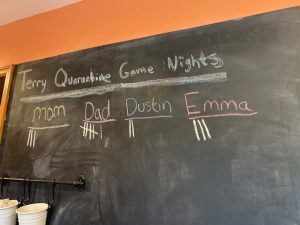 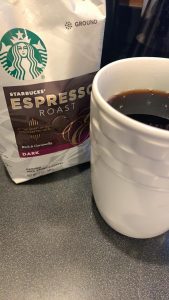